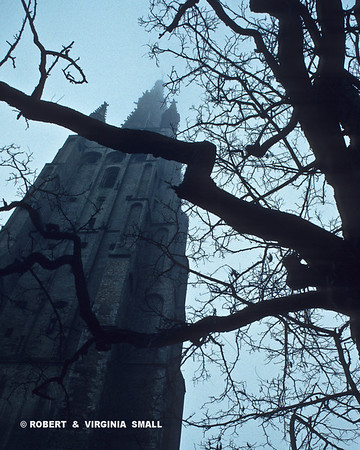 CATHEDRAL IN MIST - BELGIUM
NEW YEARS EVE - THE NEW MILLENIUM December 31, 1999 Spent a pleasant day wandering amongst the lovely old buildings and canals and just enjoying the ambiance of this peaceful and pretty old city in its holiday dress. Back to rest and ‘dress up’ (just a bit) and then we walked back down to the main square we had visited earlier and had a really lovely dinner at a busy restaurant after a brief conversation with the doorman, as we had not made reservations. The brightly lighted and very busy square had music set up for a concert and many skaters were gliding about an ice skating rink in the middle of the large square. We enjoyed several hours there and then walked on home to the Ibis. When we returned to pick up our key at the Ibis Hotel desk, they gave us an emergency packet containing, amongst other things, one hand-wind-up flashlight “just in case all the lights went out “ and a written request to pay our bill IN CASH IN ADVANCE THIS EVENING “just in case there is any problem over the millennium”! Of course, they “didn’t expect any problem” but it was “just in case.” We watched on TV as the New Year and the New Millenium swept across from Asia through Europe that night and were relieved to see that the world did not come to an end at midnight . . .