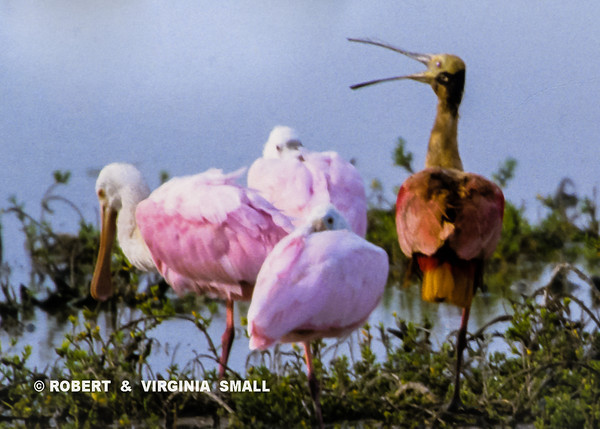 April 1997 LAGUNA ATASCOSA NWR, TEXAS - MELANISTIC ROSEATE SPOONBILL. Early this a.m we set up at Pelican Lake and almost immediately spotted a large, unusual wading bird amongst the Roseate Spoonbills feeding in the distance: A chocolate brown and rosy plumaged Roseate Spoonbill! A MELANISTIC ROSEATE SPOONBILL! We spent most of the day waiting in the hope that the bird would move closer, but no! We did have the opportunity to have the sighting confirmed by Barbara Kennett, one of the birding guides (they call them "BIRD-BRAINS" on the Gulf Coast!) at the refuge and several other staff members at the refuge who came out to check the sighting. (Insurance against accusations of 'photoshopping' in this tech age!) To add frosting to this 'cake' of a day, a Flamingo landed quite nearby that staff and Mrs. Kennett believe may have been blown in by Hurricane Andrew in the recent past but which they had no photograph of until today. Note: We believed the spoonbill sighting and photos to be a rather newsworthy event and sent several mailings out with words and pictures of the sighting but had no response whatsover - and that's how the old ball bounces . . . chicken one day, feathers the next!