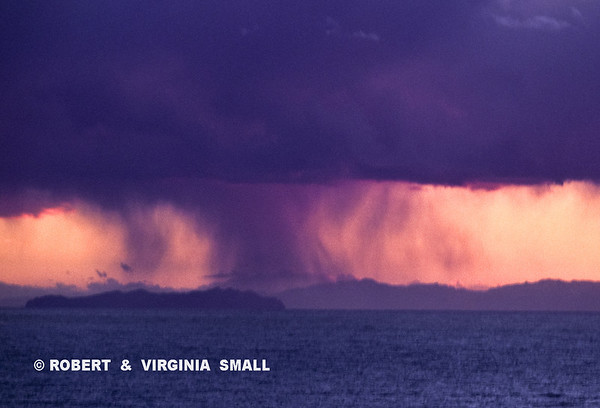 STORM OFFSHORE, ITALY
November 20 and 21, 1999 We drove over the Cinque Terre, ancient olive groves (huge nets set to catch the olives as they drop from the trees) and some grape vineyards on near vertical farm terraces on the rugged mountainside, the road often only 10 feet wide, straight up on one side, and straight down a couple thousand feet on the other, truly a breath-taking, spectacular but often hair-raising drive. Then on the autostrada you really have to hand it to the Italian highway engineers: they produced a highway , here as in much of Italy in the mountains, straight and level as an arrow’s flight, linking bridges perched on piers hundreds of feet high across deep abysses to long, dripping tunnels through the mountainsides. Bridge, tunnel, bridge, tunnel . . . until we made it to the exit for Portofino where, after quite a few U-turns, we found room in the Hotel Stella where we were given a fifth-floor ’terrace-dorm’ (what is that??) “the only room available, # 54”, though there were only three cars at the hotel. Ahh, well, it’s warm and cozy in the ever more threatening weather out of doors tonight. We rose early, quite rested, to light snow and an all-day drive through driving rain and high winds, then heavy snow blowing sideways across the windshield driven by the high winds. Snow in Monte Carlo, for heaven’s sake! Afraid to go on but afraid to stop and glad we didn’t. Many cars, trucks and buses stuck in the mountains and piled up onto snow banks at the side of the highway. Pressed on through this freak snow storm and finally, in desperation, turning off to Marseille of all places, the size of city we always try to avoid. Found a room at Hotel Mascotti and had a picturesque but muted, misty view from our room of the old Port of Marseille area.

Nov.22, 1999 Monday. Had a great breakfast but a terrible time getting our car out of the underground car-park under the merry-go-round across from the hotel. There was no snow in downtown Marseille though all the countryside around is under several inches of it as we head out for the Camargue.